The basic social and demographic characteristics of expecting women, typically in their seventh month of pregnancy, and respective fathers who participated in the Cohorts ’18 study, are presented below based on the responses from mothers to our questionnaire. The families involved in the research represent families (that are expecting a child) living all over the country.

Among parents expecting a child in a married or cohabiting relationship, there is a well-established tendency showing that the majority of men are older: men are at least a year older than their spouse/partner in 73% of cases. Fathers are typically 3,5 years older than their expecting partner/wife. Younger mothers are much more likely to have a child with an older man. As the age of the mother increases, the average age difference between couples decreases.

As more and more unmarried couples live together and have children with the spreading of cohabitation, we also examined the ‘real’ relationship status of couples, in addition to the formal marital status. The expecting women were divided into two large groups: 55% lived with their spouse, and 41% lived in a cohabiting relationship, regardless of their official marital status, meaning that there are still slightly more children being expected by married couples. The proportion of pregnant women who had children without a partner or with a partner living separately was only 4%. 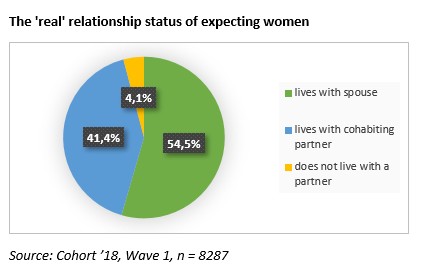 Nowadays, the significance of postpartum marriages is remarkable, so the marriage plans of those living in a cohabiting relationship can be interesting. The majority of cohabiting pregnant women, 62%, planned to marry their partner “sometime”, while the proportion of those who clearly rejected marriage (“would not marry at all”) was only 11%.

The relationship status showed a correlation with the number of children. Out-of-wedlock (with or without cohabitation) childbearing was most common when expecting the first (51%) or (at least) the fourth (56%) child. This association may be based on the fact that many women marry after having their first child but before the birth of an additional child, and on the other hand, married people are also more likely to have a second or third child.

In terms of the partnership background of having a child, the effect of the level of education is strong. Unmarried childbearing is the least common among female university graduates (22%). Women without a high school diploma are more likely to have a child in a cohabitating relationship (62%), and this group also holds the most mothers having children without a cohabiting partner (9%).